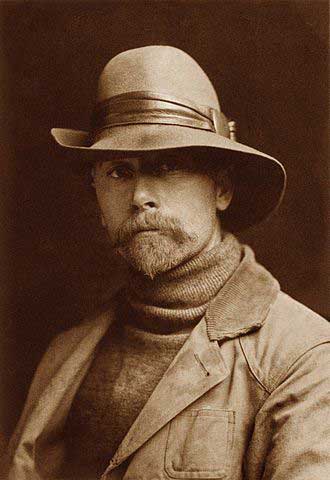 Curtis was born on February 19, 1868, on a farm near Whitewater, Wisconsin.

Curtis left school in the sixth grade and soon built his own camera.

In 1906, J. P. Morgan provided Curtis with $75,000 to produce a series on Native Americans. This work was to be in 20 volumes with 1,500 photographs. Morgan's funds were to be disbursed over five years and were earmarked to support only fieldwork for the books, not for writing, editing, or production of the volumes. Curtis received no salary for the project, which was to last more than 20 years. Under the terms of the arrangement, Morgan was to receive 25 sets and 500 original prints as repayment.

Eventually 222 complete sets were published. Curtis's goal was not just to photograph but also to document as much of Native American traditional life as possible before that way of life disappeared. He wrote in the introduction to his first volume in 1907, "The information that is to be gathered ... respecting the mode of life of one of the great races of mankind, must be collected at once or the opportunity will be lost." Curtis made over 10,000 wax cylinder recordings of Native American language and music. He took over 40,000 photographic images of members of over 80 tribes. He recorded tribal lore and history, and he described traditional foods, housing, garments, recreation, ceremonies, and funeral customs. He wrote biographical sketches of tribal leaders. His material, in most cases, is the only written recorded history.

Around 1922, Curtis moved to Los Angeles and opened a new photo studio. To earn money he worked as an assistant cameraman for Cecil B. DeMille and was an uncredited assistant cameraman in the 1923 filming of The Ten Commandments. On October 16, 1924, Curtis sold the rights to his ethnographic motion picture In the Land of the Head-Hunters to the American Museum of Natural History. He was paid $1,500 for the master print and the original camera negative. It had cost him over $20,000 to create the film.

In 1935, the Morgan estate sold the rights to The North American Indian and remaining unpublished material to the Charles E. Lauriat Company in Boston for $1,000 plus a percentage of any future royalties. This included 19 complete bound sets of The North American Indian, thousands of individual paper prints, the copper printing plates, the unbound printed pages, and the original glass-plate negatives. Lauriat bound the remaining loose printed pages and sold them with the completed sets. The remaining material remained untouched in the Lauriat basement in Boston until they were rediscovered in 1972.