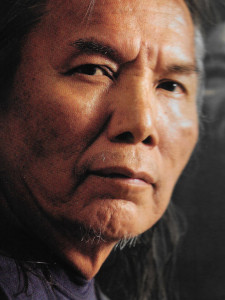 As a child, Donn began drawing with crayons, and, at the age of six, he won his first award at the Arizona State Fair. As his interest and talents developed, he started creating pastel drawings and later transitioned to painting with oils, which, currently, is his predominant medium. In 1987, when Donn began his career as an artist, he was moved to create a series of pastel drawings, which later came to be known as the Blanket Series. The first drawing of the series depicted a young child wrapped in a Pendleton blanket, surrounded by a deep, black background.

Using gallery-wrapped canvases for his oil paintings, Donn admits that his preference for that type of canvas is that it requires no frame, which means it is ready to hang and, in his words, “has that contemporary look.”

A left-handed artist, Donn Clark comes from a large family of artists. One of his older brothers, Carl Clark, is a nationally acclaimed jeweler, who, along with his wife, Irene, focus their tremendous talents on creating exquisite, micro-inlaid jewelry. Another older brother, William Dixon, is also an artist who has attracted national recognition for his acrylic and oil paintings. The brothers believe their talent has come to them through their mother, Modesta Clark, also a gifted artist, specializing in weaving rugs. Unlike most weavers of the Diné, Modesta’s rugs are not of the traditional style but of designs of her own creation. Although no longer with us, the mother of 12 children, Modesta leaves a legacy of her perseverance through difficult times, her attitude in life and her incredible art. She passed away this last July, 2011 at the age of 99.

While his talent may well have come through his mother, Donn believes the greatest influences in his art career are artist David John and the late Clifford Beck, both of the Dine’ tribe.

Donn states, “I am always grateful for my talents and will always look for new ways in creating my art and music. It is all wonderful and never ending.” Like most American Indian artists, Donn illustrates Native people in contemporary day-to-day life, as well as warriors, hunters, and historical images from centuries past. Although Donn has succeeded in developing these themes and images in his art, he is inspired to try something different. His attraction to deep, dark colors, as well as black, move him to keep pursuing his intrigue of darkness and the uncertainty it conveys. Thus, from the Blanket Series emerged a new series entitled Out of the Darkness, which uses black but adds deep colors in a subtle way.

Donn reflects on his art and says, “I know that some artists are critical of their work, and I’m no different. In my early years of painting, I really didn’t like what I was producing. Times were few and far between that I would create something I liked, but, with the Out of the Darkness series, I’m happy with every piece I complete.”

The Out of the Darkness series conveys much for Donn, as an overall social statement and on a personal level as well: “Oppression of American Indians today still has a strong grip in America, but we as a people still hold steadfastly to our convictions, traditions, and aspirations, and we refuse to let go or give up. The darkness in my paintings is a symbol of this oppression, and the lighter colors represent our unwillingness to give up.”

In addition to his successes as a visual artist, Donn holds his own as an accomplished musician. A self-taught guitarist, Donn has been playing music since his youth. While he fully enjoys the thrill of a live performance, he feels that his most notable musical talent is his ability to compose music—mostly blues, rock and roll, and his favorite, jazz. His accomplishments as a musician have expanded beyond the guitar, as he has taught himself to play keyboards and his compositions now include arrangements for keyboard.

Donn is of the Dine’ (Navajo) and Chiricahua Apache tribes and is originally from Winslow, Arizona. After graduating from Winslow High School, he continued his education and, in 1980, received a Bachelor of Fine Arts degree from Northern Arizona University in Flagstaff, Arizona. Donn also holds an Associates in Computer Graphics degree, which he received in 1999 from The Art Center in Albuquerque, New Mexico, and a certificate in the art of faux painting at Barth’s Faux Studios in Las Vegas, Nevada.

Donn states, “Each of the elements in the drawing has a certain meaning for me. For instance, the background will always be black, which represents darkness and uncertainty. When I was a child, I was afraid of the dark, as many children are. The blanket represents protection and security. The overall meaning of the Blanket Series is, “Although I live in a conflicting, troubled world, I live with confidence, hope, and trust, and the blanket is a symbol of that trust and all that is good.