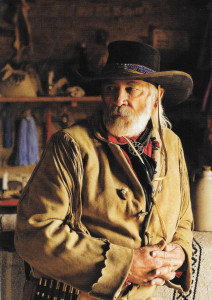 Dan Deuter was born on a 5,000 acre ranch in South Dakota, where he was the oldest of six children. In addition to the usual cattle and horses, the family sold Shetland ponies. It was the children’s responsibility to break the ponies. “If you can ride a Shetland, you can ride anything,” Dan explains. “We only half-broke the ones we liked that way no one bought them. We always rode half-wild ponies. I still like horses a little wild”. On the ranch, the kids hunted pre-Columbian bison kill sites for arrowheads; found a buffalo jump which dated back to 1000-1200 CE, and tipi rings that went back over 200 years. The Smithsonian studied the sites. Dan also learned history there. “Indians could find a use for every part of a buffalo, elk, and deer they hunted, but in plentiful times not all parts were used.”

The Deuter’s ranch was homesteaded in the 1880’s and there was always hospitality when the Sioux Indians came calling. “Great-grandmother would bake bread and they’d all visit. It was a long time before his father admitted his grandmother a Metis Indian.”

At twenty-one Deuter was given a set of paints for Christmas. A few years later, his Aunt entered him in an art show, but only told him the afternoon before the show. He packed a field art bag, loaded up his paintings, and they drove 130 miles to a big South Dakota art show. “I threw a caribou hide on the ground, created easels out of willow branches, hung out some buffalo paintings and drew a crowd including Indians who liked the fact that I was painting Indians with respect.”

During the course of finding his way to the Rocky Mountains in Colorado, Dan rode on horseback from Canada all the way to Colorado. He rides in buckskins, clothes from the 1800’s, breechcloth style, or cowboy, always soaking in the atmosphere, sights, sounds, and landscape, and experiences, which make his paintings authentic and honest.

Deuter served as the director of the Fort Uncompahgre Living History Museum for over a decade. In his next adventure, Dan helped managed the Scenic Mesa buffalo ranch in Hotchkiss, CO. In addition to the day to day operations, patrons would pay to go on an authentic hunt, usually on horseback with 1870 period riffles. Horses were integral to his work. “It is fun to see how horses learn to hunt. I value a horse as much as I do a weapon in a buffalo hunt.” His best hunting horse, Flash, a mustang caught on the Navajo Reservation, has appeared in many of his paintings.

Through all these years, Dan’s life experiences gave him material that set his paintings apart from all others. A few of these life lessons are: you can shoot a buffalo in the forehead with a 30.06 and barely cause him to shake his head…in remembering a Grizzly charge, “it was in slow motion, there are no ears on a mad bear”. The feathers on Indian lances are there so that if a buffalo charges, it aims for and hits the feathers and not the horse.

Dan has built a large medicine wheel out of buffalo skulls that is an airline marker for Montrose airport as well as a scared ceremony site used by Indians. There are skulls, assorted historic outbuildings, skins, tomahawk target, their original log home and ranch animals on the ranch today.

Bison, horses, mountain men, Indians and fur traders are all signature traits of Dan Deuter’s realistic interpretations of the Old West. An insignia of Deuter’s paintings is that they most all have motion, often fiercely running for survival, scouting or enrapturing moments of connectivity.

“I always wanted to be an artist in the worst way, and for 30 years, I was. I never had formal art lessons. I call it self-educated, not self-taught”. His paintings have sold for over $30,000 and can be found in the collections of Western Art connoisseurs throughout the world. His works have been featured in The Smithsonian, Cowboys & Indians, and Western Style, as well as Southwest Art and many other notable publications.

Dan lives comfortably between the past and the present. “I am happy to have lived when I have lived and glad to be as old as I am. This way of life is disappearing. Less than seven percent live in the country now. I was dragged kicking and screaming into the 21st Century”. Canvas provides the bones and oil paint is the blood with which Dan Deuter paints his experiences, memories, history, and passion. Every painting is an expression of the history he loves and has experienced. It is his legacy, past and future.