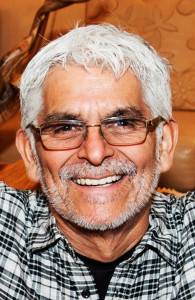 Through his artistic ability, Robert transforms the lowly gourd into an object of beauty, power and symbolism. As such, they become highly collectible fine art objects. Robert has a limitless supply of ideas and designs. To quote: “Many of them come from the area itself. I get a lot of inspiration from the Native American people, but most of the pieces come directly out of my own head. Every gourd is different. I can walk up to one and instantly see what would look good with it.”

He loves the old designs prevalent in Native American culture–prehistoric and historic–especially the Anasazi, Hohokam and Mimbres bird and animal designs which he incorporates into his gourd pots and rattles.

Over the years, Robert has created medicine men chanters, Navajo warriors, Hopi butterfly maidens, Navajo drummers, storytellers with as many as 33 children, Apache burden basket ladies, turtle storytellers and masks of every size and description. Among the most famous are his deer antler ghost masks. He also transforms gourds into pots of every size and shape using prehistoric designs as well as Acoma and Hopi kachina faces, fetish bears, rabbits, deer, birds and more.

The gourds are stitched, etched, cut, broken, scorched, sandblasted, dyed and wrapped. They are adorned with yucca fiber, suede, buckskin, raffia, African beads, shells, heishi from the Santo Domingo Pueblo, inlaid turquoise, willow sticks, horsehair, turkey feathers, cloth, snake skin and tablitaheadresses.
Robert was probably the first to use gourds as a fine art medium in a contemporary southwestern fashion. Robert says, “I am not the first person to recognize the beauty of gourds. Gourds were probably the first utensils of mankind, and have been found in tombs around the world. The Indians have been using them for centuries in many utilitarian ways, for scraping and shaping pottery vessels, as well as for ceremonial purposes as rattles and even kachinas.”

So whether you are just discovering the beautiful gourd art of Robert Rivera, or you have been watching his work evolve over the years, one thing is for certain. Just when you think he has thought of everything to do with a gourd, he will come up with yet another breathtaking creation that will capture your heart and color your imagination